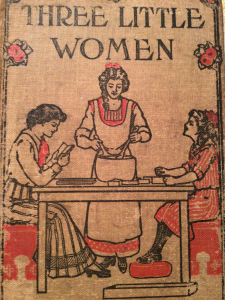 This book, owned by my grandmother’s sister-in-law and published in 1913, features a Black character named “Mammy,” caretaker of a wealthy white family. It is chock full of racial slurs and stereotypes, used even by its Black characters.

My grandmother–the inspiration for my novel’s main character, Leola–possessed a legendary heart. In spite of her own family’s shaky finances during the Depression, Nana supplied needier neighbors with produce from her garden and acted as midwife to many home births.  While my grandfather, Joe, served in WWII, she managed their farm, raised two lively daughters, and continued to work outside the home. When Joe returned from war with a crippling spinal injury, she single-handedly nursed him to health.

My other grandparents were similarly impressive people–which made it even more confusing when I’d hear them use slurs and stereotypes to reference people of color. Even after my parents intervened and they stopped saying such things, I was never sure how to justify my respect for my grandparents with the fact they might be racist.

Years later, while researching the setting of this novel, I encountered the idea that white southerners born in the early 20th century were, by default, white supremacists.  In spite of those earlier experiences with my grandparents, this notion was troubling, at first. The Alt-right movement had recently taken root in this country, and the term white supremacist conjured images of grim-faced skinheads chanting hateful slogans, not the humble, mild-mannered family members I knew so well.

But while the doctrine of white superiority is today mostly a fringe ideology, a century ago, it was as widely-accepted as the Model T’s trundling every small town road.  This viewpoint arose, in part, as a reaction to a new influx of immigrants hailing from far-flung countries unfamiliar (and thus suspect) to most Americans.  On top of that, Black WWI veterans had begun actively demanding equality from the country they had faithfully served.  In the face of these seemingly threatening changes, white people felt frantic to reclaim their dominion.

In the South, whose agrarian prosperity had always relied on one form of oppression or another, the creed of white superiority further justified a legal system based on marginalizing others. This system, named Jim Crow after a degrading African-American caricature, was much more than a set of laws. It was also an unwritten ‘etiquette’ taught through example, repetition, and endless propaganda. 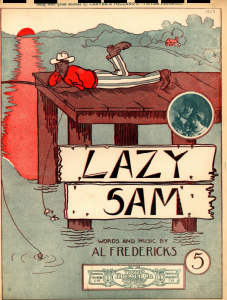 Popular sheet music of the early 1900s extolled racist stereotypes. (And this was one of the “milder” examples I found.)

By the time they were teenagers, white southerners of that era would’ve witnessed and (subconsciously or not) taken part in countless acts of racial degradation, expecting Black folks to step off the sidewalk as they passed, patronizing stores that proudly advertised serving only 100% Americans (aka whites of northern European stock), consuming popular entertainment that derided people of color.  Leola’s Baptist minister has recently exhorted his congregation to prune back the efforts of Blacks agitating for civil rights, lest they spread like Johnson grass and regularly quotes scripture to justify the inferiority of other “races.”

But adolescence is a time when young people, in the throes of developing distinct identities, take fresh measure of the world around them. As I imagined that specific world through the eyes of someone like Leola—respectful, yes, but also sensitive, questioning, perceptive—I had to believe some teenagers noticed the paradox of their Do Unto Others society.  Noticed and felt deeply conflicted.

For Leola, this awareness crystallizes when she sees George Gumbs, an African-American friend, humiliated at the local dry goods store. Is not right! a startling voice whispers in her mind, an internal admonishment she’s never heard before in this context and has no idea how to address.  While some white adults—mostly prominent and well-to-do—did speak out against racial terrorism, Leola’s youth, poverty, and gender would’ve seriously limited her agency. It’s only as bigotry hits even closer to home that her newfound conscience finally finds its voice—however halting.  However small.

I don’t know whether my grandparents questioned the bigotry of their culture while they were young but, in later years, I saw hints of how it had marked their psyches.  The most chilling example was when my other grandfather, Henry, spoke about the lynching he’d been forced to attend as a child. Most terrible thing I ever did see, he’d say in a trembling voice, eyes reflecting the terror of his nine-year-old self.

In the end, my grandparents tried to unlearn the intolerance they’d so carefully been taught, wholly embracing their adult children’s dedication to the civil rights movement. Little could they imagine that, decades later, their grandchildren and great-grandchildren would still be reckoning with the legacy of white privilege…and the resounding verdict of Is not right. 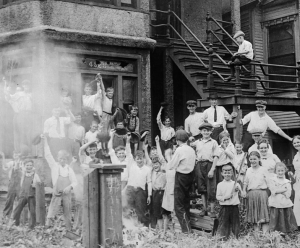 It wasn’t just the South: During the Chicago race riots of 1919, children cheered as a Black person’s home was set on fire.

Coming soon: Red summer and the rise of Black resistance; How the automobile saved women; Crazy as a bullbat, meaner than a snake, and other ways to gossip in Texan