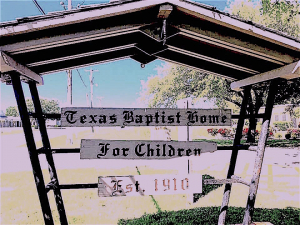 I believe that one carries the shadows, the dreams, the fears, and the dragons of home under one’s skin…
Maya Angelou

In the midst of writing this novel, I had a chance to return to Texas after many years away.  While there, I visited the orphanage in Waxahachie where my grandmother and her siblings lived after their mother’s death in 1919. The ‘Home’, as it is still known, exists in some form on the same spot as the original complex, but now serves a foster care facility and adoption agency.

The staff showed me some old photos, including the aerial shot, below, of the complex in the 1940s or 50’s.  The boxy building on the right side is part of the original orphanage before it was torn down–along with the original sidewalk that now leads to the Home’s  Welcome Center.

Looking down that pathway, I imagined my grandmother, 13, arriving with her three younger siblings: Edith, 8; Larkin, 11; and  Charlena, 3.   I tried to imagine the jumble of feelings she must have experienced taking those first tentative steps toward a new, uncertain life. Perhaps after months of taking care of their little family alone, she felt some relief. Maybe, as an aspiring college student, she knew that Waxahachie’s school system would offer much better educational opportunities than she’d had in her rural hometown. But mostly, she probably would’ve been grieving all she’d lost: her mama, friends and neighbors, the community that was all she had ever known…and Papa, who she still hoped might return.

The sidewalk that once led to the original orphanage.

That moment informed the fictional scene in my novel, when Leola and her sisters arrive at the Home: Helping them from the car, Leola eyed the long walkway—a stick-straight path that left no doubt where a person would end up. Each step down it felt like surrendering everything she’d known and loved. Felt like leaving Papa behind forever too.

My grandmother’s father never returned, and his seeming betrayal had an effect on the rest of her life. But just as I had envisioned that one pivotal moment at the orphanage, my research–and still unraveling clues about this resonant family mystery–gave me a new understanding of this loss, allowing me to delve deeper into the might have been’s and if only’s. The beauty of writing fiction is that it allows us to complete the half-circles and waylaid journeys of real experience. And who knows? In the process, one might just stumble upon something like the Truth.