Black WWI veteran refusing to stand down for wearing his uniform in public.

While researching the setting of my novel, I encountered many photos of young Black WWI veterans being threatened by white people—often police officers—for wearing their uniforms in public.  But the one featured here struck an especially deep chord, the valiant young Black man at its center becoming the model for my character, George Gumbs, a childhood friend of Leola’s who opens her eyes to the wages of bigotry.

Scenes like this were common in America at the time (c. 1915-1921). The Equal Justice Initiative recently investigated contemporary reports of racial terrorism during that period, discovering many were triggered by this very situation.  “Just the sight of a black soldier,” the investigators note, “just the suggestion that he might take on that empowered, adult, mature identity—that could get him killed.” 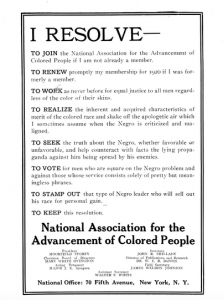 The NAACP’s newspaper, The Crisis, urged Black members to take up the cause for their freedom.

Many historians trace the birth of Black empowerment to African-American participation in the Great War.  By 1917, nearly 700, 000 Black men had signed up to serve in the European theater.  A Black solider was the first person to be awarded the coveted Croix de Guerre for bravery in battle, African-American artillery and signaling units were routinely lauded for their skill, and all-Black regiments held 20 per cent of contested territory. Yet these valiant soldiers returned home to the same brutal oppression inflicted on their people for centuries, and were even denied the pensions and disability payments they’d been promised at enlistment.

No wonder, then, that disenfranchised veterans became the model for what the recently-reinvented NAACP envisaged as the “new Negro,” no longer satisfied to wait for largely ineffectual white supporters to enact change. George Gumbs represents this new brand of Black activist.  Having returned from serving in France, where he became skilled at fixing combustion engines and also got his first real taste of freedom, he’s more impatient than ever for his due. For too long, he says, things been done to us and supposedly for us but never by us. I aim to change that. 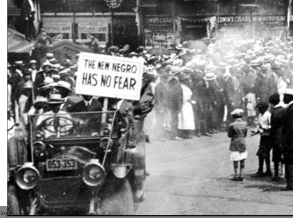 A parade in New York City’s Harlem neighborhood featuring the sentiments of “radical” civil rights leaders, including Marcus Garvey, who advocated that Blacks should answer white violence in equal measure.

Though it makes sense when George challenges the kind of everyday degradation he’s been subjected to his whole life, Leola’s witness to his protest leaves her questioning her white supremacist culture as never before. Little can she know that her friend’s political protest will soon take more consequential form, forcing him to flee Texas with his life. Horrified as she is by this development, Leola imagines George returning to their little town someday, marching down Main Street with his fellow supporters, chanting Hew to the Line! Democracy is ours for the taking!  Impossible as it seems, knowing George, she can’t help believing it could come true.

For further reading:  This online archive of the NAACP’s newsletter, The Crisis, provides a fascinating glimpse into this period of Black activism.