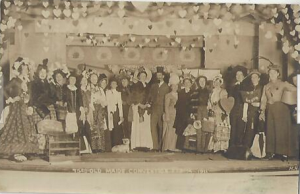 Old Maid’s Conventions were all the rage in America during the early 20th century. These events, usually held as charity fundraisers, invited the public to watch as young women paraded about in spinster attire while a narrator described their marital ineligibility: this one loved picture shows more than men; that one couldn’t cook; another dreamed of adventure instead of domestic bliss.

After disappearing behind a curtain or inside a large carton labeled, “The Makeover Machine”, the girls would reemerge, sporting more fashionable gowns and attitudes, convinced by Dr. Makeover there was no greater achievement in life than landing a good husband. 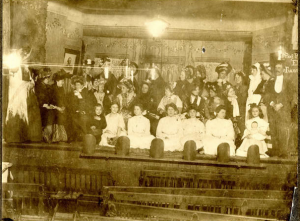 By around 1920, when my novel takes place, these events had begun waning in popularity, thanks in part to the woman’s suffrage movement and greater educational opportunity (for white females, at least).  But the virulent sexism they reflected was still widespread, especially in deep South states like Texas. In writing my novel, it was all too easy to imagine a similar affair happening in the rural town where my protagonist, Leola, lives as a young adult. Though she considers such spectacles ridiculous (and has just broken up with her sweetheart besides), Leola grudgingly participates in one benefiting the Smith County Free Kindergarten Association.  Little can she imagine that the pageant will inspire her to speak a controversial truth, defying the very notions of femininity it promotes. 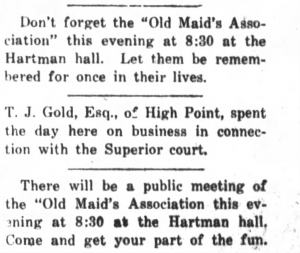 Many towns, like Salisbury, NC, had their own Old Maids Associations, composed of married woman who put on entertainments like the popular play, “The Old Maid’s Convention.” Elsewhere, members would pose as ‘desperate’ single women, inviting the public—especially bachelors—to ‘take their pick,’ only afterwards revealing the prank.

♦ Subscribe to my blog for an upcoming post about early photography and how it inspired a major plot point of my novel, ‘Til All These Things Be Done. ♦

A Novel History of the Car

The Flavor of Fiction: Part 1
Scroll to top