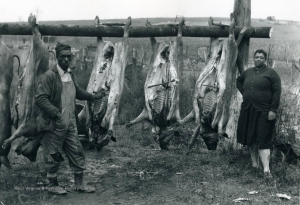 In researching this novel, it became clear that most women in the early 20th century were burdened with an inordinate amount of dirty, strenuous, and downright dangerous labor.  They worked with chemicals like lye and boric acid, handled open laundry fires and sizzling stoves, hauled water, and handled raw meat, and also worked outside the home as seamstresses, servants, and factory attendants.  As Leola puts it during a time of particular strain between her parents: Even before his accident, Papa often came home from work to whittle or read his books or go fishing, while Mama merely traded one job for a thousand others: Cooking, cleaning, wiping mouths and bottoms, on guard at all times for snakes and uncapped wells…

One particularly onerous task was goose-plucking. Geese were ill-tempered creatures, less predictable even than bull cows, and far more likely to wreak havoc on those who trespassed against them. While a lumbering bull had to make a real effort to get his horns into you, geese could wield their knife-sharp teeth with brutal precision. 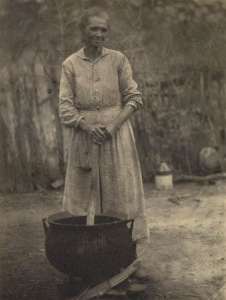 And then there was hog-killing, bloody, brutal, but absolutely essential. A 500-lb hog could feed a family from winter to spring, also supplying treats like chitterlings, which were as addictive as potato chips (not to mention the leftover skin made a long-lasting chewing gum).

Here’s an excerpt from my novel of a hog-killing scene that takes place when Leola is distraught over the unexplained disappearance of her father: Leola had attended hog-killings nearly every year of her life, yet never before felt squeamish of any of it: Not when the pig was clubbed over the head and strung by its feet, then split open, throat to bung…nor when the tender ears and dainty cloven feet were severed from the body… But today, when the first dead pig was dragged to the kettle, Leola’s hands shook as she ladled scalding water over it, scraping the stiff hair from its skin.  Later, as the hog’s innards were ripped from its body, she didn’t gape in wonder, but turned away, darkness flitting across her vision.

The blood reminds her too much that her father might have been hurt (or worse). Yet in this moment of terrible foreboding, Leola keeps working, knowing if she doesn’t they are doomed, for sure. 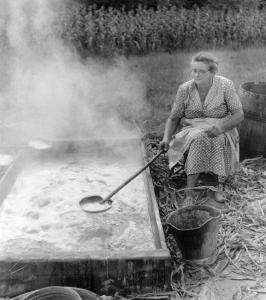 The Dreams, The Fears, The Dragons…