When she was 12 or so, my grandmother’s father lost his arm to a sawmill blade.  Nana rarely spoke of her father, but I do remember her describing the fateful day Papa’s coworkers brought him to their house, heaving his mangled body onto their kitchen table, blooding dripping everywhere.

That moment becomes a pivotal scene in my novel, setting in motion a chain of far-reaching events.  Meanwhile, even as the fictional Papa relearns a host of new skills, there are plenty of things he can’t master with one arm–including his beloved pastime of whittling.  I don’t know if the real Papa actually whittled, but it isn’t out of the question. Whittling has been practiced by generations of my own family, and I treasure the few tiny masterpieces passed down to me over the years.   So it makes sense this could be a vehicle not only to demonstrate Papa’s determined recovery, but the bond of love between father and daughter. 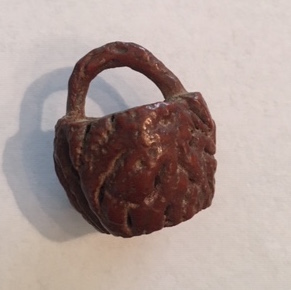 My greatgrandfather, Andrew, carved this tiny basket from a walnut shell.

When she realizes how much her father misses his hobby, Leola takes it upon herself to invent a substitute hand that can hold the piece of wood while the other one carves. It has to be something easy to rig up, using readily-available materials. But what could that be?

My research landed in some interesting places, especially from the field of occupational therapy–though nothing practical to Leola’s situation. But one day, while organizing a kitchen cabinet,  I came across the apple peeler we’d bought when my kids were  young and loved to make pies. There was the spike for holding the apple, the handle for turning the fruit as the peel is removed. Could this be the solution I (and Leola) needed?

I ran back to the Internet, discovering that, during the late 1800s,  apple peelers were considered the kitchen gadget every “modern” farm wife had to have.  I imagined Leola setting eyes on one such device, owned by her great-grandmother, and having an Aha! moment like mine: There it was, with its metal “arm” and sturdy “fingers,” and a clamp to hold everything in place. Like a vise only better. After some experimentation, Leola improvises a way to lock the shaft in place, using a small butter knife that can be easily removed so the carver can turn the object. 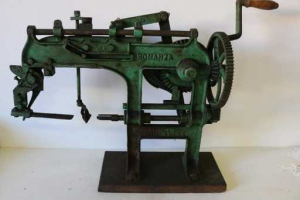 When she presents the ‘whittling arm’ to Papa, his eyes shine: He smiled, pulling two chairs near the whittling machine and picking up his penknife again. “Now, Rosalee, let’s see if I can’t teach you some of those techniques we were talking about the other day.” He winked at her sisters. “Mae, Karla, you watch, too, for soon enough, it’ll be your turn to try.” And then the whittler set to work.

The Dreams, The Fears, The Dragons…
Scroll to top