Everything in life is somewhere else, and you get there in a car. 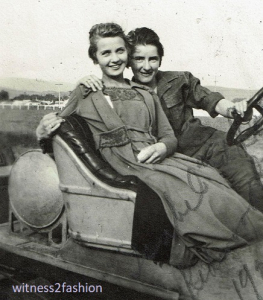 This photo inspired the driving scene with Leola and Ship. The young woman behind the wheel wears a denim driving suit like the one Leola’s mother made for Ship.

I’ll never forget earning my license at 17, driving my parents’ boxy blue Granada alone for the first time. Though I was heading to a friend’s house a mile away, that sense of limitless freedom, the thrill of being in the driver’s seat—literally—of my own life, are as vivid as yesterday.

Researching my historical novel, ‘Til All These Things Be Done, I was surprised to learn that, a century ago, cars already served as a liberating force in the lives of teens—and many others.

By 1918, nearly two million automobiles trundled America’s byways, thanks in large part to the introduction of Mr. Ford’s cheaper Model T, aka the Tin Lizzie. In rural states like Texas, people once separated by vast distance now had the time and ability to socialize as never before, providing marginalized groups–people of color, women, laborers–a new solidarity in the fight for equality. In fact, many historians cite increased mobility as an important factor in the social reforms of the Progressive Era.

For my main character, Leola, that emancipation happens on a more personal scale. When her well-to-do chum, Mary Shipley, invites her on an outing in the Shipley’s new motorcar, Leola is hardly in the mood for a joyride: Her father has recently vanished, leaving her family on the verge of ruin. But best friends can be persuasive and, as they fly down the road, Leola realizes it was true, there was something in the forward movement, the wind whipping her hair…that made it hard to dwell on problems.

Inspired by Ramsey, Emily Post tackled her own cross-country drive in 1915–mostly to raise money for a costly divorce. Her journey was more luxurious than Ramsey’s but the publicity helped sell her first etiquette book in 1922.

During this outing, Ship relates the true story of Alice Ramsey, a housewife from New Jersey who drove cross-country–solo–in 1909, mostly to disprove the popular notion that women couldn’t drive. At the time, there were so few passable roads in America, Ramsey had to use telegraph poles as navigational aids and often slept in her car, once waking to find herself surrounded by native American warriors in full battle regalia. But she accomplished her feat, heralding the arrival of the new, freer woman.

Hearing this tale, Leola feels renewed hope for the future. Little can she imagine that the car will offer a test of her own courage in the days and years ahead.

At one point, Leola agrees to date Gordon LaHaye, a popular classmate whose father is a celebrated dentist and, as she eventually discovers, a bigot of the first degree.

On the night of their outing, Gordon shows up in his dad’s gleaming Barley sedan which like many cars of the period is open to the elements, making it difficult to converse at higher speeds. Though speaking tubes were usually only available in higher-end models, I’ve taken artistic license to install them on Gordon’s dashboard so that, when he proves himself every bit his father’s hateful son, Leola can loudly voice her dissent.

The car plays a supporting role in other pivotal scenes too, as when Leola and another character must flee a desperate predator, and when her teenaged daughter, Rose, questions the secrecy of their family’s past. Always, it’s Leola who decides the direction of her journey, proving her heart at every turn. 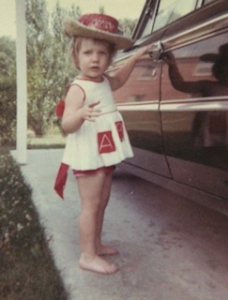 Beginning the long road trip of life. (And I still drive barefoot.)

How Not to Be a Spinster
Scroll to top